This dun is situated about 160 m south west of the MacLean Mausoleum (Caibiel Mheamhair), Laggan, close to the east shore of Loch Buie and about 1.5 km south east of Moy Castle.  It occupies the summit of a rocky outcrop and is protected on its north-west side by a 20 m cliff face and slope.  It can be approached relatively easily from all other directions.

For most if its circuit the stone wall has been reduced to a low spread of stony debris averaging about 2.1 m in thickness.  Two short stretches of facing-stones are still in place on the west and north-east sides, but the east corner has been largely destroyed.  The internal enclosure measures 17 m by 14 m.   The position of the entrance is unknown.

A recent, rectangular enclosure occupies the east corner of the interior of the dun, and two more enclosures impinge upon the outer face of the wall on the south east and south west. 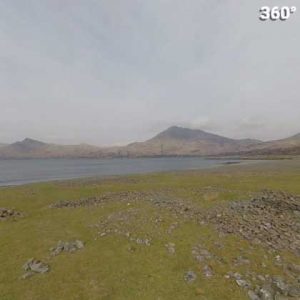 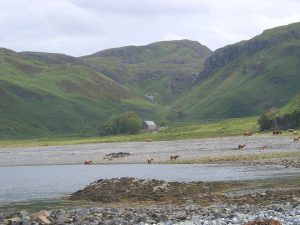