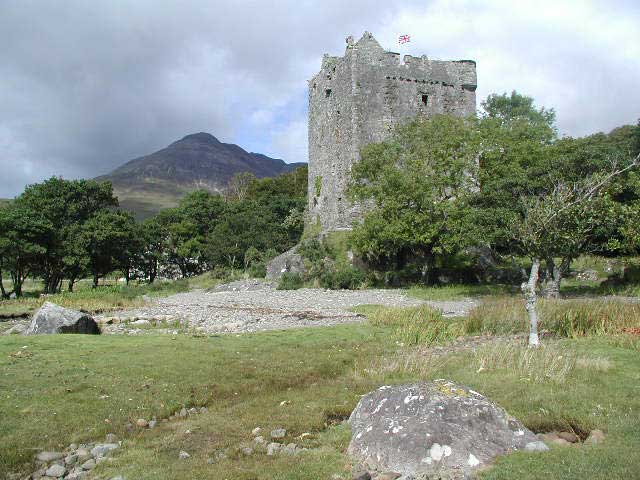 The following is edited from The History of the Clan Maclean and from The Royal Commission on Ancient and Historical Monuments of Scotland, 1980, Vol. 3, Mull, Tiree, Coll & Northern Argyll.

Moy Castle stands on a low rock platform at the head of Loch Buie and was built in the 15th century by Hector MacLean, brother of Maclean of Duart and the founder of the re-named MacLaines of Lochbuie who made it their home.

It is a 3 storey tower with a garret. On the centre of the ground floor there is a well with a depth of 1.8 metres. The well is cut into the solid rock but always has fresh water in it and is at a level much above the outside ground level. There is currently no knowledge of the means of water supply to this well.

The castle was captured from the MacLaines and garrisoned by Campbell followers but later returned to the MacLaines. It was abandoned as a residence in 1752 when Lochbuie House was built.

Building materials of the original castle are schistose slabs quarried from nearby Laggan, harled stone, and beach boulders, all laid with lime mortar. Quoins and margins to all openings are a fine-grained sandstone of greenish hue quarried at Carsaig on the Ross of Mull. Large blocks of slate paving for the parapet-walk were probably quarried from Ballachulish or Easdale.

At the main first floor there is an impressive barrel-vaulted chamber which probably served as the main hall in the original arrangement. At the NE end of the hall there appears to be a raised platform or dais. The hall is served by two original mural chambers in the diagonally opposed east and west corners. There is a garderobe and latrine chute still visible on the SW wall. Near the angle formed by the limbs of the chamber is a hatch providing the only access to a well-constructed pit-prison, 3.3 meters in depth and 1.2 meters square at the base with tapering side walls and corbelled at the neck.

Spiral stone stairs and a short lintelled passage lead from the stairs to a long narrow apartment formed within the thickness of the SE wall, perhaps intended as a bed chamber, though some historians claim it was used to hold the dead during funeral obsequies. The second level rooms are reached through a fine original doorway with pointed arched head composed of four voussoirs and the dressed surround uniformly wrought with a broad chamfer. The next two stories had floors of wood, though the walls are 2.2 meters thick.

Externally the most interesting features are the upperworks of the tower where the parapet is embattled with broad merlons and crenelles of deep and narrow proportions. Each turret is provided with small windows and smaller square openings, possibly firing apertures. A steeply raked loop with double aperture at the base protects the entrance to the castle.

The entrance door is locked now because of a risk of crumbling masonry. Renovation started in September 2006 to stabilise the interior and external stonework. Even though access is restricted to the castle for safety reasons, the castle is still worth a visit as it has a commanding view over Loch Buie.

To learn more about Moy Castle and the Lochbuie area you can visit the Mull Historical & Archaeological Society website. 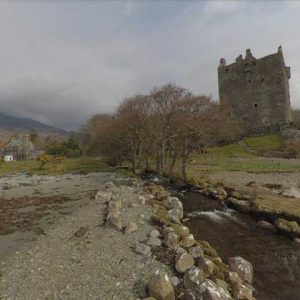 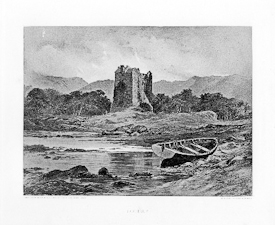 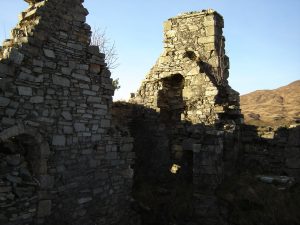 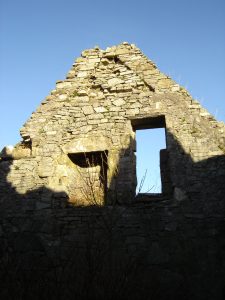 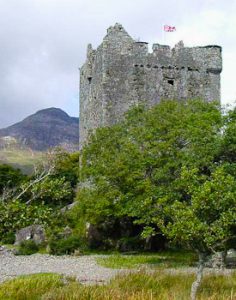 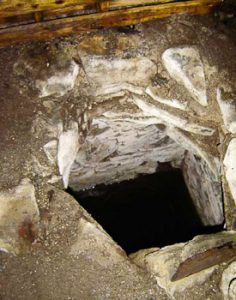